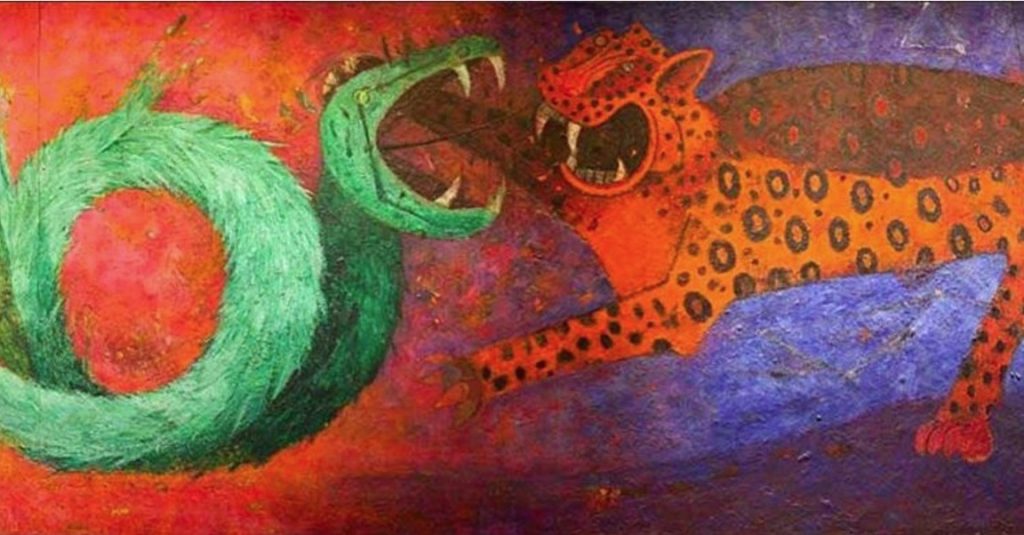 Rufino Tamayo mixed european styles, such as the cubism and surrealism with Mexican culture motives, charged with a deep symbolism. Using an explosive color pallete and experimental stetics.

Rufino with Zapoteca’s origin, had a close relationship with social subjects, but he was different than the other mexican painters of the time, such as Rivera and Siqueiros, thanks to his focus to the esthetics instead of the political messages.

This piece was requested by the Museum to represent, from the modern art perspective, the prehispanic and mexican nacionalism cosmovision to give a contemporary dimension to the museum.

The main theme synthesize the prehispanic thinking, represented by the antique cosmogonic myth of nahua: Quetzalcoatl (Feathered Serpent) and Tezcatlipoca (The Jaguar) conflict.

These two gods are the sons of Ometecuhtli and Omecihuatl, origin and support of everything. The fight between these two deities symbolize the movement of the essential energies of the universe that create the cosmic era and the creation itself of celestial bodies, the earth and the living.

The dualism is the main iconographic reference of the piece. This piece can be found as the day and night dualism represented by the fight between the snake and the jaguar.